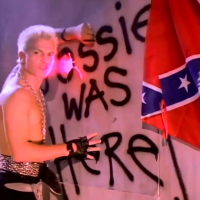 Billy Idol – Hot In The City

#quotefromthe80s
'Cause when a long-legged lovely walks by
Yeah you can see the look in her eye
Then you know that it's
Hot in the city, hot in the city tonight
#BillyIdol #HotInTheCity

So many songs literally had a double life. Some very famous songs like Take on me by a-ha, or Careless memories by Duran Duran. Among these, also Billy Idol’s Hot in the city, which was even third single ever. The first was Dancing with myself, followed by Mony Mony in August 1981 (this song even had a triple life). Billy comes back in May 1982 with this beautiful and peculiar song at the same time. In the meantime Billy has moved from England to New York, and this song tells of one of the things he probably loved to do, wandering around town on a hot summer night (presumably in 1981). And through the sprawling metropolis Billy meets, with his words, dreams and schemes, and long-legged lovelies, and the night of the city becomes hot in every sense.

Actually, in the first life of the song I would say that hot is mostly referring to the Summer heat, if we look at the video. The technological effects are absolutely primal, considering today’s levels, but I would say that it was not a bad video , for a debut singer in 1982.

Sure, the 1987 video looks like it was shot a thousand years later. And in fact five years in an intense period like the 80s is truly an eternity. Billy Idol meanwhile built and evolved his character, and gave his videos an unmistakable style. And now the song becomes hot especially in the sense of spicy. And there is all the iconography of Billy Idol: dresses in leather and studs, motorcycles, beautiful women in skimpy clothes, up to the final twist: the model Perri Lister, who was also Billy Idol’s partner, hoisted so elegant and beautiful in a real crucifixion.

Perri was a regular presence of Billy’s videos and songs: she was the female voice of Eyes without a face, she was the bride of White Wedding, she also appeared in To be a lover. By the way, she was also the model who danced topless in the video of The Chauffeur by Duran Duran.

There is another element in common with the 1982 video: the reference to America, not only in the text, in which Billy explicitly exclaims “New Yoooorrkkkk”, but also in the stars and stripes flag reproduced with neon lights.

One last curiosity: in 1982 Hot in the city had some success in the United States, and Billy Idol had a rather popular rocker image. Many local American radios asked Billy to record alternate versions where, instead of “New York”, he mentioned the cities where the radios were located. And he came out with versions where he yelled “Bostoooon”, “Minneapoliiis”, “Sioux Faaaallllsss” and even “Amarilloooooooo”.

The most famous Rebel