Night in the Village 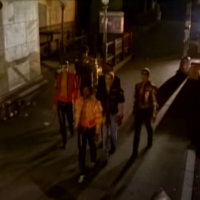 Village People – 5 O’clock In The Morning

#quotefromthe80s
When I just turned and walked away
There wasn't much that you could say
Except to say you really loved me
It's five o'clock in the morning,
#VillagePeople #5OClockInTheMorning #FiveOClockInTheMorning

A policeman, a worker, an Indian, a biker, a soldier and a cowboy. There was only one group where the costumes were more famous than the people. We are, of course, talking about Village People, whose characters we all remember, but very few have ever known the names of the singers.

Village People are a project born in 1977 when the composer French Jacques Morali met a singer named Victor Willis. They began collaborating to compose a disco-music album for dance clubs, with a focus on the gay community in New York. In fact, the name Village People, which was also the album’s title, referred to the Greenwich Village neighborhood, already a symbol of the city’s gay communities.

It was a success, and Morali, with partner Henri Belolo and Willis himself, decided to find some dancers performing with Willis in dance clubs. Their success was unstoppable, and the producers decided to create a real group, with permanent members singing and acting their part around Willis. For their casting, they used the following three rules: macho appearance, good dancer, and with mustache.

To stay close to their audience, they decided on the costumes, which of course had to reflect the imagination and liking of the community of their fans.

And so other five members joined the group. For the record, singer Willis was dressed as a policeman, and sometimes as an admiral. The Indian boasted true Indian ancestry (I wouldn’t be surprised to learn that the he had found his costume in the attic), and each had its own history.

These were the golden years of disco music and Village People, the years of Macho Man, Y.M.C.A., Go West, which was later covered by Pet Shop Boys, In the navy. The highest point of their success was probably in mid-1979, when they were engaged in a several-month tour and a series of television appearances. At the end of that tour, however, things began to change.

Meanwhile, Victor Willis left the band, and was replaced by Ray Simpson. Ray is the brother of Valerie Simpson, who sang Solid in the duo Ashford & Simpson. Then, the golden age of disco music was coming to an end, perhaps due to historical reasons or lack of generational renewal, and so, when Village People shot the film “Can’t stop the music” in 1980, the result was quite disappointing. There is no doubt that two or three years earlier the movie would have entered the collective imagination of pop culture.

At the beginning of 1981 the production decided for a total change of positioning, for the release of the album Renaissance, clear already from the title. The album was not among their most successful, but it contained an absolutely sensational song, this beautiful 5 o’ clock in the morning, which entered the charts in late February. Beautiful song in music and lyrics, where the singer reflects on his sentimental situation, feeling somehow guilty, as he wanders the deserted streets of the night city.

The Village People are unrecognizable: to get hold of the new generations, the worker, the policeman, the Indian and so on have given way to new-romantic models. Machos and mustaches gave way to effeminate movements and makeups. Gay iconography is always present, but in the video Simpson is clearly having a relationship with a woman.

Probably, the video also contains a hidden message. Aside from Village People, only three characters appear in the video: the woman Simpson tries to win back, a girl waiting in the street, and a policeman who annoys her and forces her to leave. So, the cop is the only negative character in the video. But we know that in their symbolism the policeman was the previous singer, Willis, who had left. Who knows if these few seconds are a message (not too uplifting) for him!

So Village People found, in their darkest moment, their most beautiful song. They will still have a moment of success, four years later, with Sex over the phone, a song only apparently light and superficial, but that anticipates the explosion of the link between sex and technology, in various forms. And above all, the song that will see the return of the classic Village People costumes, although revisited.

Of the original group, only two members remain until 2017; the Indian and the soldier (sometimes dressed as a sailor). In 2017, however, the original singer won a decades-long lawsuit, and was granted the right to use the name Village People. And so in today’s shows, the only original component is still the singer Victor Willis, the policeman.