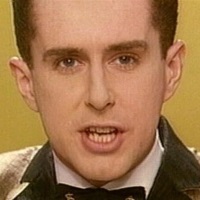 #quotefromthe80s
Americanos - Blue Jeans and Chinos
Coke, Pepsi and Oreos - Americanos.
Movies and heroes in the land of the free
You can be what you wanna be.
#HollyJohnson #Americanos

The video is about a family of Latinos, the Gomez family, who would finally become acceptable to a WASP family, the Rockwells, only when they won the Lottery.

The video shows some standards of the American dream, in the aspirations of the opposite sides of the Rockwells, the wealthy family taking the picture in front of their cottage, and the Gomez family, helping out around the house, with lower standards in crowded narrower spaces. They share the same aspiration to win their “solid gold prize”, no matter what their starting conditions are. And they both win, but while the Rockwells win a whole year’s dog food supply, the Gomez family wins a house, a car and a boat, which of course make them acceptable under the way of living and the prejudices that “Americanos” points out.

And finally the Rockwells accept the guy from the Gomez family as the husband of their daughter, who smiles while knitting when she realizes what’s happening.

Holly Johnson’s descriptions are never superficial: while he, as the tv presenter in golden jacket, and the blonde miss play the role of fate, under this ironic layer there is a deep truth about social relationships and prejudice.

The hit reached the high places in the charts in UK and in many European countries. We can really say that Holly realized his… European dream!

Alone on the train